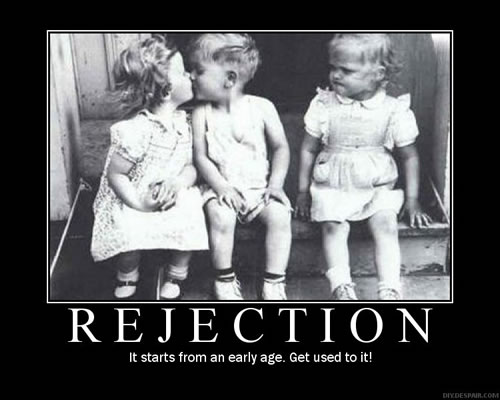 When I like a guy I expect him to like me back. I expect him to think my sarcasm and witty banter is well…the funniest material he has ever heard. I expect him to love my curly hair and huge smile. Oh and he of course will think my body minus the six-pack abs is totally perfect. What if everyone we liked liked us back? If our expectations were actually met and we never had unrequited love? Rejection happens to everyone every single day whether it be from a cute guy, woman, new job prospect or acting audition. But, is every rejection necessarily a bad thing?
Once in a club, yes okay I was at a club in San Diego a few years ago…judge me all you want. Anyway, at this club I was celebrating my birthday and dancing my little heart out. I had on a cute skirt and tank top, with killer heels that matched perfectly…I was looking good you guys. There was this guy that I had been trying to get to notice me so I just so happened to scoot close and closer to him on the dance floor.  I did my best to look like I could care less about his existence, on the inside I was hoping he’d notice mine.
Then something that often happens on the dance floor happened: A crazy drunk chick showed up and ruined my moment! Then somehow I got bumped into him and drunk girl made some slurred and unrecognizable sounds which led him to look at me, and try and commence to a few words of small talk and promptly turn back around to his friends. Ummmm…yup…Rejected. And when I say I looked cute I’m telling you I looked C-U-T-E. Damn.
Last weekend I met up with a friend for drinks and she was enamored with the bartender. She kept telling me how much she liked him and that she came to this bar almost every week, and he would sometimes give her free drinks…she’d give him huge tips etc…etc. So, I asked her has this “relationship” gone past bartender-customer status, and she said no. In fact she knew nothing about him but his name and the across the bar flirting she experienced with him…according to her. Well, me being me I went right up to the bar, called him over and asked him if he had a girlfriend because my friend was interested (I had her permission to ask so she wasn’t ambushed). He said,”Yes.” Rejected.
I could literally write ten posts about moments of rejection I have experienced as I’m sure we all have. Even now there is this guy I have a small, tiny, itty bitty bit of a school girl crush on, but alas we’ve done noting but tweet each other and outside of that, well not a damn thing has happened. And here’s the thing if he really was interested he’d let me know. Just like the guy in the club if he was interested in me crazy drunk girl would have had no effect on him talking to me. Who knows why but for some reason club guy was not meant to be apart of my life journey. And maybe that’s a good thing.
Sometimes we need to be rejected! Really I mean it. We see with our eyes first right? That’s how most of our interest in others begin. Then we may learn some facts through talking to them, tweeting them or stalking them via Google or Facebook, but I digress. Letting someone know you are interested in them can be so daunting for some of us right? You get nervous, shy or maybe you’re the opposite and you shine like a light bulb in an area of darkness.
Either way we are setting ourselves up for either acceptance or rejection, and there are some people who we really need to be rejected from! Think about it have you ever liked someone and had it not go anywhere then learn something about them that makes you say,”Thank goodness I did not date him/her!” I have. Also at times we may want what the universe, God, or whoever you believe in knows we are not ready for. That person may have been ready to get married and have kids and you aren’t. They could have religious beliefs that you don’t agree with, or could have just been a huge douchebag.
Rejection is going to happen to all of us for the rest of our lives. I believe all of that rejection is getting us closer and closer to that one person that we will spend the rest of our lives with. And you may have to go through rejection, failed relationships and even some drama to find him/her, but it will be worth it. Don’t ever be afraid to put yourself out there and potentially face rejection because your life will change exponentially when the last rejection leads you to your true love destination.
Have you ever been rejected? What did you learn from your experience?
Twitter: @AwkwardGirlLA
Instagram: @toliveanddateinla
YouTube: To Live & Date in LA

0 thoughts on “Sometimes, Rejection is a Good Thing”