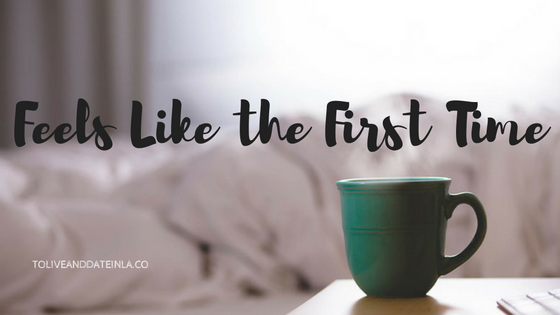 Chemistry is an essential ingredient in all relationships, but if you do not have sexual chemistry can the relationship last? Whenever you meet someone new, there are a lot of firsts that you have with that person. The first date, the first all night conversation, the first kiss, etc…
Which brings me to an awkward moment many of us have had; The first time you have sex with someone new. Here’s the thing, first time sex can be so amazing, but it can also take a very weird and not so amazing turn. Mistakes can be made that either make you run away, or make you want to improve every other time from that point on!
When I am dating someone new I have a tendency to build up all those “first” experiences in my mind before they’ve even taken place. This is often done by women as we romanticize everything by nature! Let’s just say my last “first” didn’t go so well: I met Venice beach -we’ll call him Venice Beach because that’s where he lived- anyway, he was not my usual type which made him even more interesting.
We got along great, and on our first date literally talked all night. Dating him was easy, but I struggled internally with how I felt about him, because my usual routine of pushing someone away was trying to hedge its way into this new relationship I was excited about.
One night we went on a very romantic dinner date, and went back to his place afterward. The sleepover had not been planned and apparently nothing else that night was either…After an intense make out we took things further and we all know where I am going here. But then things took a decidedly awkward turn. We could not catch onto each others rhythms whatsoever, positions were weird, embarrassment sunk in, we tried different things, and then it all went horribly downhill from there. So bad that I freaked out  gave him a reason for having to leave, and ran out of there. I immediately felt guilty and horrible, and he felt embarrassed and upset.
He insisted on walking me out to my car as I was leaving a trail of dust behind me in such a hurry to escape the situation. I could also tell he was really hurt, but I was so uncomfortable with my own awkward and embarrassing feelings that I didn’t think about how he felt at the time. Selfishly I thought only of myself. The next day I called trying to talk about what happened, but the damage had been done.
We went on a few more dates, and did eventually talk about what happened, but I still held my feelings back. And Venice Beach did admit he was really hurt and embarrassed by what took place that night, but the damage had been done. He was different and his attitude had changed. I never told him that I really liked him and wanted to be with him. I can’t help but think that this miscommunication and awkward first encounter was the catalyst for his behavior which led to him pushing me away instead, and the end of our relationship.
Dating is awkward, relationships take work, and communication is essential. In that situation we both made the huge mistake of not communicating with one another. Talking about your feelings, wants, desires or sex with your girlfriends or guy friends can be so easy for us to do, but when it comes to communicating about these things with our partner can be difficult.
Telling your partner your likes sexually is just as important as telling them your dislikes. I have honestly had a hard time doing this in my past relationships and I was the one that suffered because of it. According to a recent poll 97% of men want a woman to speak up and tell them what they want in bed. That means there is only a mere 3% that want you to keep your desires to yourself, so start talking! Speak up and communicate the way you feel, and what you want, because holding your feelings back from someone can make you miss out on something amazing.
Twitter: @AwkwardGirlLA